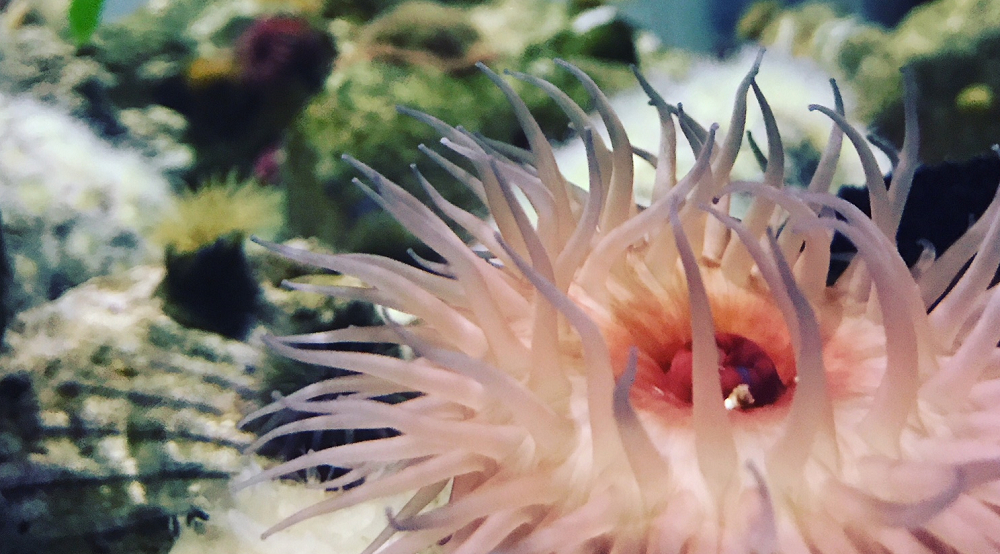 Sea Anemones (Actiniaria) are named after a flowering plant because of their colourful, plant-like appearance. Interestingly they are closely related to corals and jellyfish, all sharing the group name Cnidarians, meaning ‘nettle’ in Latin. Their venom filled tentacles are called nematocysts.

Like a nettle, anemone tentacles sting, they are filled with venom which will paralyse their prey when they get entangled, slowly moving the catch to their mouth which is positioned in the centre. They eat fish, small crustaceans, zooplankton and Anemones are usually attached to rocks, but can also live on the sea floor, patiently waiting for fish to pass by close enough. Anemones do not move, but instead can change shape and even invert to protect themselves. This being said, they have very few predators.

Anemones come in all shapes and sizes, of all colours and live in oceans across the entire World, some living in the deep with others preferring the shallows. There are more than 1,000 different species, which range from 1cm to 1metre in diameter!

DID YOU KNOW: Some species of anemones glow under ultra violet light. The Snake Lock Anemone for example glows fluorescent green!

Anemones are made up of polyps. Some polyps produce eggs and sperm, while others house the fertilised eggs while they develop into larvae. Once this larvae is ready it releases into the water and floats as plankton, until it develops into a juvenile polyp where it settles somewhere new to grow into an anemone. Some anemones simply split themselves into smaller pieces to grow as two separate anemones, therefore reproducing asexually. This process is called Lateral Fission. Because they are able to essentially clone themselves, they have actually the potential to live forever!

Some species of sea anemone have developed a mutually beneficial relationship with other animals. For example Clownfish live in Bubble Tip anemones so they can protect one another and provide one another with a source of nutrition. Hermit crabs have teamed up with smaller anemones where by the anemone lives on the crab’s shell providing protection for the hermit crab and movement to the anemone so they can capture more food. Incredible!

from 1cm to 1metre