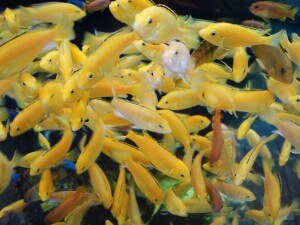 A stock-take with a difference has been taking place at Blue Planet Aquarium, Cheshire Oaks over the past week.

Each year aquarists at the award-winning aquarium have to conduct a census of their entire collection; all creatures great and small.

This year’s count has revealed they are currently looking after in excess of 4,000 individual animals which collectively represent approximately 260 different species.

Unsurprisingly, fish make up the bulk of these accounting for 180 of species, while the others are made up of 60 invertebrates, which include everything from insects and living corals, to octopus and crustaceans, 15 reptile species, 12 types of amphibian and one mammal species in the shape of their family of otters.

Display Supervisor and Freshwater Aquarist, Thomas Fielding, said: “Undertaking a stock take as complex and diverse as this is always challenging.

“In addition to new arrivals, we also have highly successful captive breeding programmes for a number of the species here and so numbers are always fluctuating.

“Some species, like the otters and sharks, are relatively easy; however many others like the poison dart frogs and many of the insects are extremely difficult to count.

“Several species are masters of camouflage while others like to spend much of their time half-buried in the sand so it takes a keen eye, a good head for numbers and quite a lot of patience,” he added.

One thing the stock-take does reveal is the sheer variety of species on display within the aquarium which features marine and freshwater species from around the world alongside reptiles, amphibians, mammals, insects and spiders.

“It’s not just the range of different species we have on display here, it is also the difference in their size and appearance,” said Tom.

“One of our smallest fish species is the shell dwelling cichlid which measures around two centimetres in length while one of the largest is our sand tiger sharks which are more than three metres long and weigh more than 275 kg,” he added.