The Sizes of Different Sharks: How Do They Compare?


From great whites to whale sharks, there’s no denying that some sharks are true behemoths of the sea. But how do sharks measure up against us humans? And are they really as imposingly large as you might think?

Meet Our Keepers: What’s it Like to Look After Sharks


Want to learn more about sharks? We’re chatting to dive officer, Joe Cross, about life swimming with these amazing creatures.


We’ve put together a guide on everything you need to know about sharks, so you can get to grips with just how wonderful and valuable they really are.

Know your sharks: A spotter’s guide


Sharks are such interesting and varied animals, but it can still be hard to identify the different species.  Use our guide to find out how and where to spot these magnificent fish around the world. Hint, two of these beautiful species of shark can be found right here at Blue Planet Aquarium! Walk through their […]

Where Do Sharks Live? Fun Facts About Shark Habitat 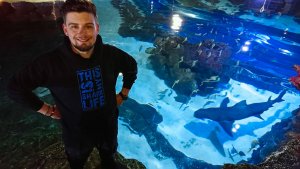 
Everyone knows that sharks live in the water, but what else do you really know about sharks and their habitats?   In fact, did you know that sharks can be found in all five of the Earth’s oceans, as well as freshwater lakes and some rivers? If you think find that shocking, then you’re in […]

The 7 biggest sharks of Blue Planet Aquarium and the world 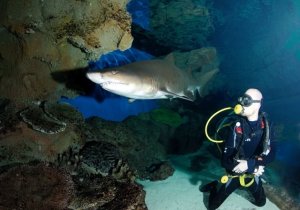 
Sharks are some of the most thrilling and beautiful creatures in the whole world. The biggest fish in the ocean, and terrifying to some, these impressive animals can be found in waters all over the planet. It’s rare for us land-dwelling humans to be able to appreciate sharks in all their glory. Fortunately at Blue […]

Easter Event: The Legend of the Mermaid’s Purse


Looking for an egg-cellent Easter event and something egg-citing to do during the school holidays? You can step into an action-packed fortnight of Easter celebration at Blue Planet Aquarium: Introducing… The Legend of the Mermaid’s Purse! – but wait… What’s a mermaid’s purse? If you’re a regular rockpooler then you’ve probably come across a mermaid’s […]

6 Deadliest Deep Sea Predators: and How They Catch Their Prey


If you’re thinking about coming to our Predators event this half term, you’ll be relieved to know that the sharks, caimans and piranhas we have on show are safely behind glass. However, should you ever find yourself swimming in the sea, or splashing around in a river somewhere exotic, just remember you could be seconds […]

The Great British Bucket List: Top 10 Things to Do Before You Die


Have you ever created a ‘bucket list’? What do you think of when you hear the term? No doubt the usual suspects spring to mind; travelling to the most Instagram-worthy destinations, dining at a Michelin-starred restaurant, and landing your dream job – but is it time you hit the reset button? True, these are all […]

11 Living Creatures that Coexisted with Dinosaurs


Dinosaurs had a good run of more than 180 million years, until an asteroid came along and wiped out life on the planet… Or did it? (That’s another question for another day.) While most life of earth met its demise during the Cretaceous-Tertiary mass extinction (also known as the K/T boundary), many marine families and […]