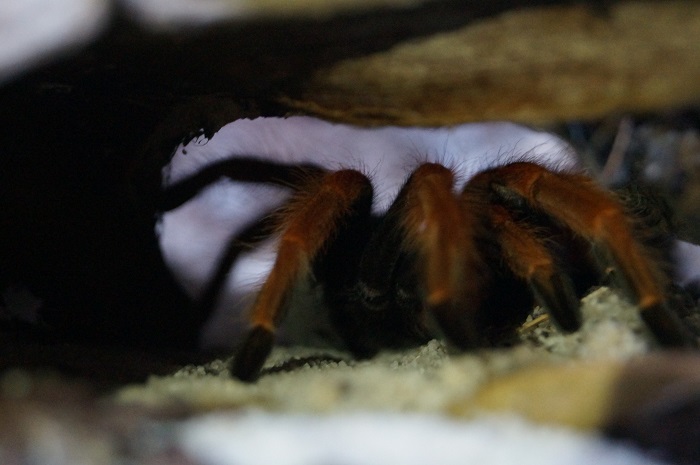 Tarantula (Theraphosidae) are a group of large, often hairy invertebrates with an exoskeleton. As they grow they moult this exoskeleton and their skin underneath hardens. As part of this moulting process they can also replace internal organs or even lost limbs!

Most Tarantulas live in burrows under the ground, using their silk twine to make comfortable home, as well as a setting a trip wire outside the entrance to their burrow so they can be notified of anything passing by. Many tarantula species flick their hairs at other animals when they are disturbed, causing irritation to them especially if the hairs get into their eyes.

Interestingly, tarantulas do not use a web for catching prey like other spiders, instead they wait until nightfall and grab prey with their eight long legs and sharp fangs. They inject paralysing venom using their chelicerae (two pincers at the front of their mouth), then liquefy the insides using digestive enzymes, before they suck down their food into their narrow mouth. They eat insects, centipedes, millipedes, and other spiders as well as frogs and mice, which can keep them sustained for up to a month.

Tarantulas are generally solitary creatures, however males and females will come together to mate. Males will leave their burrows, following the females scent and perform a mating ritual when she is located, this includes depositing sperm onto a web he has spun for her. If satisfied, they will mate and male will quickly scuttle away in the hope to not be killed by the female. The male, however will then die around six months after mating. The females however spin a cocoon for the eggs to live, which she will guard for six to nine weeks when hundreds of small tarantulas will hatch.

They are found across mid and south America, Asia, Africa and Australia where they prefer warmer climates. There are over 800 different species of tarantula and their size, colour and behaviour changes depending on their environment.